It can be argued that digital advertising is an absolutely necessary component of any marketing strategy (or necessary evil, depending on your viewpoint). However, according to most statistics related to digital advertising, businesses still have a long way to go to get it right.

According to a 2016 study, 85 percent of mobile advertisers think they’re providing a positive experience but only 47 percent of users would agree. Considering US advertisers spent more money on digital advertising than television advertising in 2017 for the first time ever (to the tune of $209 billion in digital ads!), we think it’s important to get it right. Still not convinced? Here are a few stats that may help you make up your mind:

At Denim, we manage a variety of digital advertising budgets for our clients. From managing monthly Facebook advertising campaigns to managing digital campaigns with national advertisers like Cox Media Group and Tegna, we’ve done it all. If you’re just starting your advertising strategy, read more from us about the basics on getting started and where to advertise here. Keep reading below to learn more about some of our best digital advertising successes:

For one of our design/build clients, we’ve seen incredible success since implementing Facebook advertising. Prior to beginning this form of digital advertising, we typically saw less than 70 visits per month to the client’s website from social media. In less than one year, that number has increased by 360 percent! Even more impressively, in five out of the last 12 months, social media has been the number one traffic source to the website, and the client is getting leads from Facebook. The Facebook page has also nearly tripled in followers in a one-year timespan. But the best part of all? The client has seen these great results with a fairly small ad budget that is divided between boosted posts, web clicks and page likes. Typically, we see a cost per post engagement of around $0.20, with some posts as low as $0.02 per engagement! 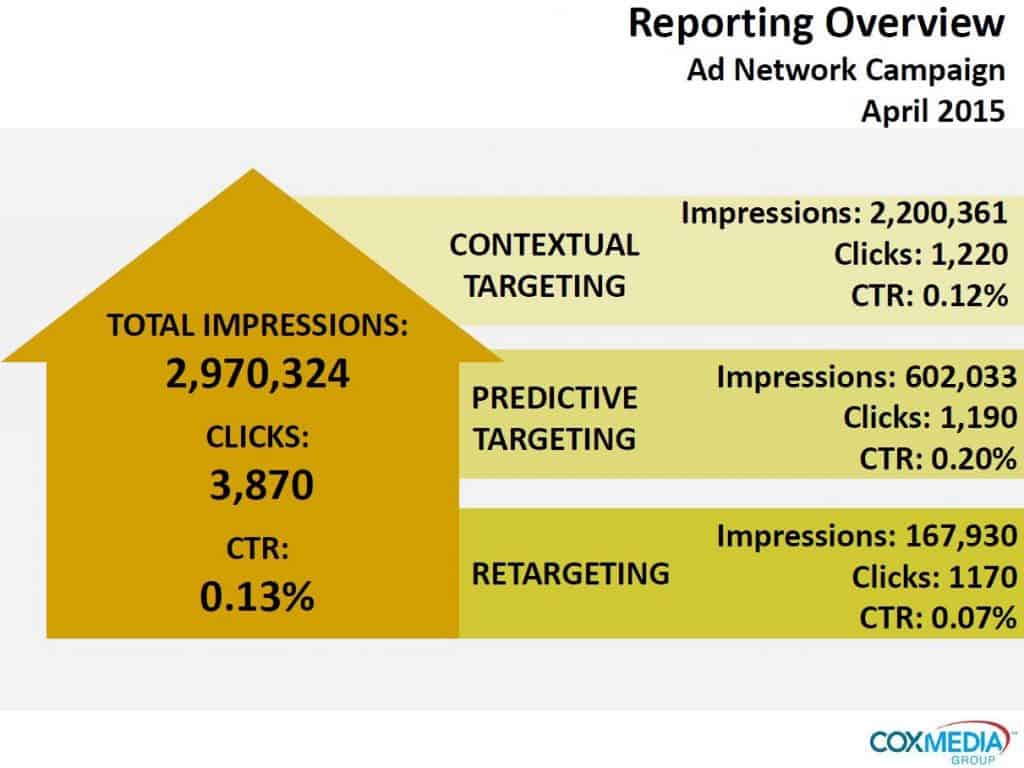 We’ve also directly managed advertising campaigns and budgets for our clients with national advertisers like Cox Media Group, an integrated media company. We worked with CMG to place behaviorally targeted digital ads for a southeastern home builder running a 90-day campaign. Mobile and tablet ads far outperformed the desktop ads in this campaign, with predictive targeting being the most successful option. The record-setting promotion resulted in 68 home sales thanks to strong digital advertising components. The campaign reached a total of 20,000 people on Facebook, and the CMG ads generated more than 3,800 website visits in one month alone! Throughout the campaign, the digital ad network was the third highest driver of website traffic only behind organic and direct traffic sources.

We are currently working with Tegna, a broadcast, digital media and marketing company, to promote a client’s informative video series to consumers on Facebook. The local utility company produced a series of videos highlighting the company’s services that featured a well-known public figure as the brand spokesperson. Despite the star power, the videos struggled to gain traction with consumers. We connected the utility company with the local Tegna news station and created a digital advertising campaign that promotes the video links. The ads run on the local news station’s Facebook page, allowing them to reach a large audience while having their message come from a local, reputable source. The ads have significantly increased video views, with views across all videos tripling in less than four months. The campaign has been so successful, the company has started additional campaigns with Tegna, and plans to produce more videos in the near future!

We love digital advertising because of its measurable results. While there is certainly still room for improvement in reporting, it is a proven form of advertising that converts leads. If you’re ready to improve your digital marketing strategy, our team at Denim Marketing has experience managing ad budgets large and small, and will work to ensure you get targeted results that help improve your bottom line. Contact us today for more information.