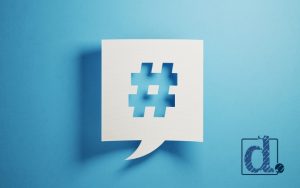 Let’s start with, what is a hashtag and why should I care?

The pound sign (#) first became called a hashtag back in 2007 with the dawn of Twitter.  A tweet by Chris Messina, a former Google developer and San Francisco techie said, “How do you feel about using # (pound) for groups. As in #barcamp?” This was tweeted on Aug. 23, 2007, and that’s how it all started. So, for all the Gen X and Boomers that grew up thinking of # as a pound sign, it is time to rethink the many uses of the now beloved hashtag.

So, where do I use hashtags? And how do I know how to use them?

A Method of Categorization

The hashtag was born on Twitter as a method of categorizing posts at events like barcamp. Because Twitter wasn’t searchable, the hashtag became a way to track specific subjects and trends. Users can find others on Twitter using the same hashtag with the same interests making it an easy way to organize content. Search on Twitter is easy today, so why the explosive use of hashtags across so many sites?

Understand how hashtags are used on the various platforms. They are most popular on Twitter, Instagram and Pinterest, but are used frequently on Facebook and are becoming more prevalent on LinkedIn due to recent site changes. We often get asked how many hashtags should be used per post.  Well, it depends on the site and the person answering! Most importantly, hashtags need to be unique to each post, the company being promoted and be relevant to the post content. Remember that people are reading your content and the goal is to get them to click on your call-to-action (typically a link to your website). Having a ton of hashtags can cause readers to get distracted and click on your hashtags instead of your link. Of course, the hashtag may be the path they used to discover your content in the first place.

Number of Hashtags per Site

Instagram – Use five to six hashtags minimum, but most experts say using 11 or more per post gets the best engagement. Instagram allows up to 30 hashtags, but that can start to look spammy, so leave the hashtags as a comment instead! Make them invisible to the photo stream by preceding them with five periods or dashes, each on a line by itself (use your Note app to create this with appropriate spacing as Instagram does not allow line breaks). If you post this as the first comment on your post, Instagram followers will only see […] after your Instagram name in the photo stream, and are more likely to focus on the post in its entirety. Use from one to 15 hashtags per post; however, don’t put them in the post itself, post them separately in a comment following the post.

Pinterest – From four to 20 hashtags seems to be acceptable, but don’t get spammy. Use the hashtags to describe the image posted so that others can find it.

Facebook – Less is more on Facebook as far as hashtags go. We tend to gravitate to hashtags for contests and promotions on Facebook and not use them for much else. According to Sprout Social (team Denim’s preferred social media curating platform), the use of just a single hashtag per post on Facebook is most impactful.

Choose the Right Hashtags – It’s no surprise to find out that there are a number of free sites that can help you choose the right hashtags. We like https://ritetag.com and http://best-hashtags.com. These sites help identify the most popular hashtags as well as the ones that will work best over time.

Create a Custom Hashtag – There are people who have made a living out of creating custom hashtags. They create them for weddings and business events, and the more memorable they are, they more they get used! At Denim, we often use the hashtag #DenimFuel to describe how we fuel or power our client’s social media and marketing programs. We also create a lot of custom hashtags for contests or promotions. For instance, we are currently running a 90-day “P.S. Did you Know?” contest for the City of Powder Springs with the hashtag #PScontest. Search this hashtag to find the hundreds of entries on Facebook, Instagram and Twitter.  Make sure to search the hashtag you create and have multiple people look at it to make sure it says what you think it says and doesn’t imply anything else!! (See hashtag fails!)

Proper Hashtag Usage – To use a hashtag in a post, put the hashtag in front of the word or phrase you want to turn into a hashtag. For example, #DenimFuel or #AffordableHousing. Remember that hashtags only work without spaces and this is why both upper case and lower-case letters are used in hashtags.

Trending Topics – Visit any page on the native version of Twitter to see hashtags that are trending.  Incorporate these popular hashtags into posts to boost post reach, but don’t be spammy and be sure you are not hashtag hijacking (using the hashtag for a different purpose than the one originally intended). If the hashtag isn’t relevant, don’t use it.

Networking – Use hashtags to network. Discover people you might want to follow by searching #FollowFriday #AtlantaRealEstate or other hashtags.

So, what the hashtag? Hopefully now you have a little more knowledge of where hashtags came from and how they are used for business. Be a savvy social media marketer and incorporate hashtags effectively into your posts. If you have questions on how to best use them, or need help developing a social media strategy for your business, contact Denim Marketing here or at 770-383-3360.